Hot on the heels of yesterday’s Great Guest Author Roundup, a new stallion has joined the herd! Check out Derek Pangallo’s political advertising extravaganza below, inspired by an Allen West ad on Epolitics.com. Today’s Part One focuses on cookie-based political ad retargeting and originally appeared on DerekPangallo.com; we’re promised a Part Two soon.

Why Do I Keep Seeing the Same Political Ad?

Browsing around over at Epolitics.com, an online political advocacy blog by Colin Delany, I was treated to the Allen West ad you see on the right.

This is the first in a two-part series on political advertising. In this post, I’ll focus on Adwords, Adsense, and retargeting cookies. In part two I’ll tear apart this ad in particular, and talk about the best ways to solicit online donations. Also have a look at my album of Facebook political ads.

If you didn’t know, Congressman West is the controversial Tea Party Freshman member of The House of Representatives for Florida’s 22nd district. Most recently he’s been criticized for sending a scathing email to fellow Representative Debbie Wasserman-Schultz, a gentle lady also from Florida.

Why am I seeing the Allen West ad?

Colin didn’t make a deal with Allen West to put this ad on his site. He added Javascript from Google Adsense that automatically finds and displays ads “relevant” to the content of his site. When the ads get clicked, Colin makes some money in his Google Adsense account [Ed. note: not nearly enough!].

How are ads targeted?

Adwords advertisers can specifically target their ads, like the West billboard. Millions of sites use Adsense to make money, so there is many a niche to be found. You can specify what keywords should be on the sites where your ad will be shown, explicitly exclude sites (that might not be favorable to you), and narrow users by their physical location. There are plenty of pre-formatted geographies to choose from, like state, city, county, etc., but you can also draw your own area for the ad to be shown. In this case I’m making an ad to be shown just to people who live and/or work “inside the beltway”: 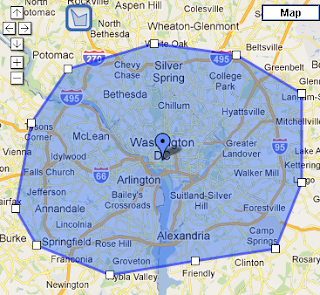 So to take a long way to answer the question, I am probably seeing this ad because team West is targeting ads toward users in DC who are surfing political-related sites. Good on ya. But, there is one more devious and highly-effective trick that the advertisers may be employing: retargeting cookies.

Most websites you visit leave cookies on your browser; cookies are what make visited links purple, save your preferences, and keep you logged-in. Retargeting or “remarketing” cookies from Google allow a website to install a cookie when you visit the site. The website can use this cookie to “recall” you and show ads no matter what site you’re browsing or what you are searching for. Remarketing cookies can have an expiration date of up to 18 months in the future.

What this means is, when I went to a bunch of tea party sites for research during the twitter debate, I may have had retargeting cookies installed that identify me as a potential tea party supporter. Since the cookies can last 18 months, I may be doomed to see tea party advertisements right up through the 2012 election (or until I clear my cookies.)

It should be noted that the Obama 2012 campaign is already using retargeting cookies, too.

Are political remarketing Cookies prohibited by the FEC or Google?

The only thing I can find on the FEC’s website about cookies is a report exploring whether the FEC’s own site uses cookies at all. Since this shows a general misunderstanding of the technology, I’m presuming they’re behind the curve in regulating the use of retargeting cookies.

Google on the other hand has specific policies regarding the use of political ads in general, and remarketing cookies in particular. How well these policies can be enforced is another matter. From the Adwords restrictions for sensitive categories in remarketing:

Sites which collect/store affirmative political stances from users cannot create remarketing lists using that sensitive information. Sites which include pages that users visiting are essentially providing their affirmative political stance cannot create lists of visitors to those sections of their sites. For example if a political site wanted to create a list of all users who’ve contributed donations via their ‘donate’ page, it would be prohibited.

Even if the remarketing list is created without any sensitive information, some types of ad text are still prohibited:

Ads which specifically note a user’s identified political opinion or stance cannot run. For example, ads which use calls to action such as “Petition for xyz” or “support Candidate xyz,” will be excluded from using remarketing, regardless of how the advertiser obtained their remarketing lists.

Example of prohibited remarketing ads include:

Sites which do not solicit or store affirmative political stances from users can create remarketing lists. Additionally, if political sites wants to create a remarketing list of visitors to their site, they may do so provided that they are not creating lists of visitors to pages within the site where a visit by a user indicates an affirmative political stance (for example, donation pages, mailing list sign-up pages; pages where they sign a political petition).

For example, if the site is for a candidate or political position/movement, it should be appropriate for the site to create lists of visitors to their informational pages. Ads which do not imply to know a user’s political stance, by using non-identifying calls to action, may run using remarketing. For example, if the ad uses benign language in the call to action such as “learn more” it should be fine to run. The below ads do not appear to know a user’s political information:

Are campaigns punished for using remarketing against Google’s terms?

All of that makes sense from a privacy standpoint, but Google really has no way to police how remarketing cookies are being used in practice. The case me even be that the Obama campaign is already violating these policies. That’s conjecture, I have to look into it some more.

Targeted display advertising is a powerful that will continue to be used in political campaigns. Developing an understanding of how targeting and retargeting work helps create better ads. In part two of this series I’ll specifically talk about the Allen West ad and his online donation page.

Thanks Derek! That’s good enough for me…. – cpd