On the Eve of Iowa, Social Media Numbers for the Republican Candidates

Courtesy of our friend Steven Kleine, Principal at Ensomo (a social media monitoring and analysis firm), see below for a graph of the online mentions of the various Republican presidential candidates in the week ending Friday, December 30th. (If you want the actual hard numbers, charts are here.) 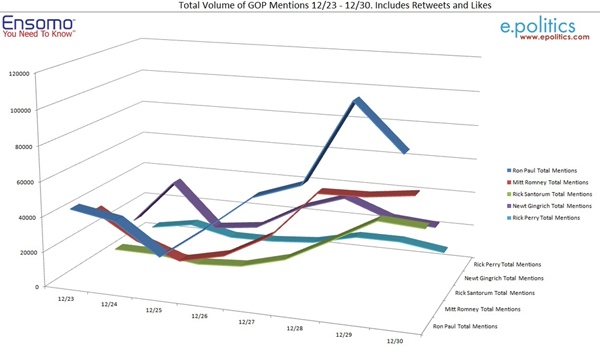 Important: these are NATIONAL numbers, not Iowa-specific (Iowa-only numbers would have cost thousands of dollars in any monitoring tool we had access to). So, these data include mentions of the candidates’ names by Republicans, Democrats and others across the country. Hence, they reflect public discussion among members of the online chattering class. Professional journalists and bloggers, note: if you have a news-gathering budget, consider investing in state-specific social media reports in 2012.

A few trends to note:

Interestingly, the trends get reduced if you exclude “likes” and retweets from the numbers. Likes and retweets indicate amplification of someone else’s opinions rather than the creation of a new opinion or piece of content, so they seem more subject to volatility. They may also suggest which trends are catching on among the broader public rather than the smaller number of actual opinion leaders who create the bulk of the fresh content.

In any case, here are the resulting graphs; note that likes/retweets comprise about 40% of social media mentions in total. 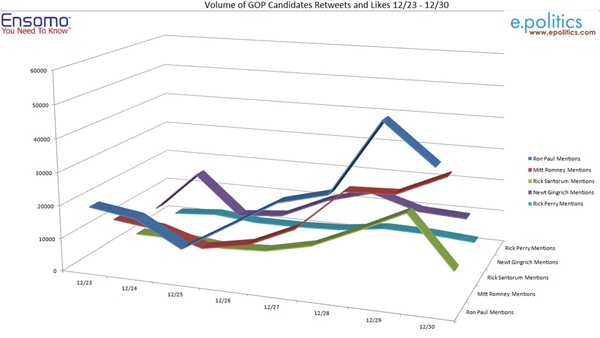 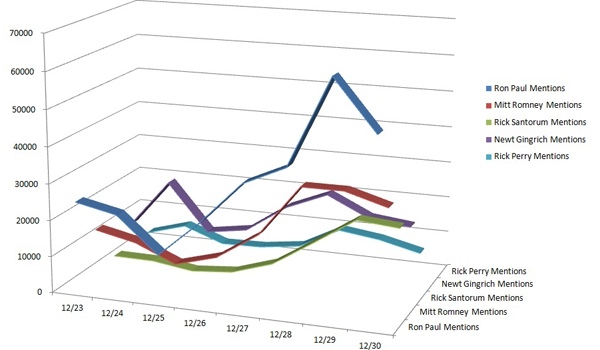