Here’s a fun way to spend your April 15th: first person to spot an online advocacy campaign using tax day as a hook gets a free…oh wait, I win! Okay, I cheated — lots of groups have been working online to organize and recruit the tax-disgruntled over the past few days, culminating in a national protest effort to launch as soon as everyone’s back from the post office. Even e.politics has gotten in on the act, at least via the Google Ads — the one shown ran on Monday, and it linked through to the nicely designed landing page below: 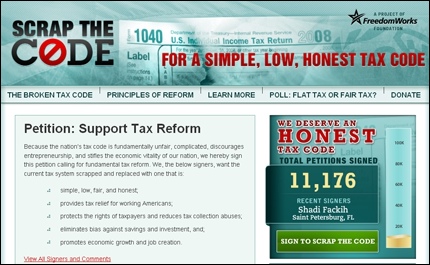 At some point in the process, the humble tea bag has become one of the movement’s symbols, with tragic consequences that could have been predicted by anyone with access to a slang dictionary. We’ll spare the gentle reader’s sensibilities by taking this any further, but others have not flinched from the matter at hand — thanks to a certain “counterculture icon” for pointing out the fine title of that last YouTube clip. Update: See also coverage from Jose in the Post.