Commercial advertisers have been experimenting with advertising in video games for a couple of years now, but Barack Obama has now given in-game ads the Presidential (campaign) Seal of Approval: he’s been running get-out-the-vote ads in the XBox Live racing game Burnout Paradise for days now. It was first reported last week on the site GamePolitics (though these pictures seem to predate that article) and spread once picked up on GigaOm (thanks, tPrez). Take a look at how the ads appear in billboards integrated into the game (photo via this guy). 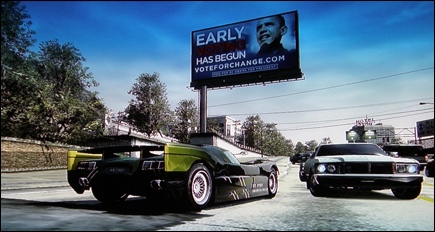 Now let’s be realistic: these ads are in the middle of a racing game and are going to blow right by players, though they must be up long enough to register if people are going to bother paying for them. And they’re aimed at a shiftless-young-male demographic notoriously resistant to political messages, unless delivered by the Swedish Bikini Team. But thinking about it, the Obamans have probably bought about as many battleground-state TV commercials as they possibly could by now, so why not try using games to try to break through? What do you possibly risk? They certainly have the cash.

More broadly, this tactic reminded me of what folks from the abortive Mark Warner presidential campaign said a couple of years ago about his appearance in Second Life: very few people actually saw Warner there, but many more talked about it, and they talked about it on tech sites and gaming sites that are normally tough to break into. In the case of Obama’s gaming ads, besides the usual political suspects, they’ve now been covered in tech blogs, gaming sites AND car sites like this one. Multiplier effect!