The online tax rebellion tea party may be going full steam on a rainy Tax Day afternoon, but the ‘baggers aren’t the only ones nipping at the heels of the news cycle this week. The Humane Society of the United States has also managed to feed a media obsession, in their case the press’s fixation on the new First Dog, with a Scooby Snack of their own — in the form of a pre-packaged online news story on shelter dogs and euthanasia. And they seem to have gotten a good amount of media pickup as a result, including a mention of the HSUS site itself in the LA Times.

The HSUS online package didn’t include anything crazy or flashy, just solid and quotable text plus video related to an in-the-news topic that has the timeless advantage of being matched with cute imagery. Nothing crazy, that is, until you start clicking on links… 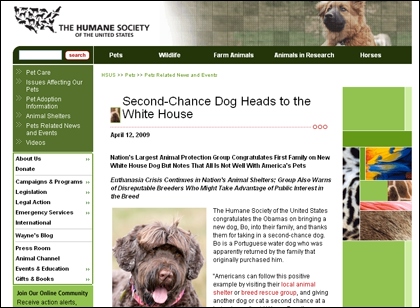 Actually, the first couple of links are just as reassuring as the main HSUS sites’s green palette and animal-pattern-abstract highlight graphics (that’s what’s going on over in the right-hand column). But in paragraph three, things take a stunning turn — the eye trips over the red-linked words “rampant puppy mills,” and your click takes you to a very different environment: StopPuppyMills.org. 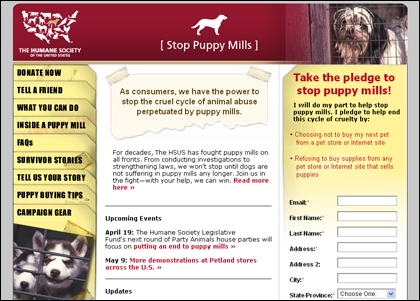 The color change — from soothing green to a straight-up blood red — is no doubt calculated to raise the emotional tenor, as is the file-folder nav menu and the ragged, runaway-note feel to the heading graphic in the middle of the page. Oh yeah, the pictures of sad critters behind bars help just a little, too…

That Obama puppy piece was no dog story, it was a stalking horse! A few minutes on this puppy mill page, and impressionable dope-addled American youth will be off in a jiffy to some left-wing animal-rights re-education camp in the middle of Oregon, next to be seen launching lightning commando strikes on science labs and pet stores across the country. Michelle Bachmann was right!

Okay fine, maybe I’m over-reacting a bit — it’s just an advocacy campaign. In any case, it’s a good job of packaging straightforward information online around a news event and actually getting media attention (and site traffic, one assumes) to your issues in the process. And if you funnel a few new recruits into the left-wing robot zombie army in the process, well, that’s a risk we’ll just have to take. After all, it’s for the puppies.