Check out this fascinating print ad placed by the National Association of Home Builders in today’s Roll Call, which starts out with quite a strong quote:

“If this thing passes, I will buy immediately.” Wall Street Journal, Feb. 5

Followed by more quotes attributed to the LA Times, St. Louis Post Dispatch and U.S. News and World Report. But check out the veeeeery fine print in the scanned version below, sent in by a little bird and revealingly photoshopped: 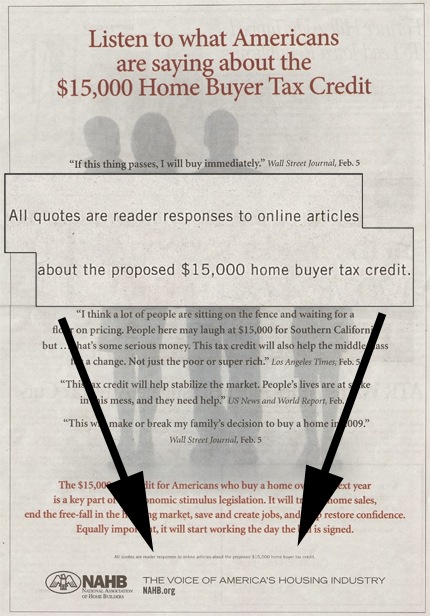 Now, let’s take a look at it again, this time WITHOUT the fine print blown-up. 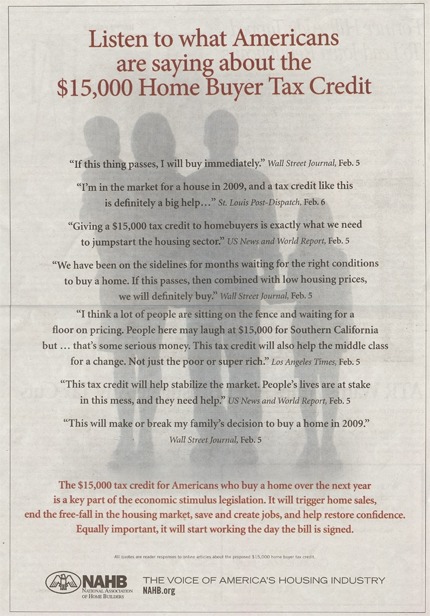 Wow, that’s pretty brazen — let’s find articles on the websites of respected news outlets, comb the reader comments for the perfect quotes about our issue, then display the quotes in such a way as to make it appear that they came from the news publications themselves. It’s about as cheesy as the movie promotional ads that include the “it’s a BLOCKBUSTER!”-style language from publications that are either made-up or are unabashedly industry shills. In this case, though, the ad appears in a paper aimed directly at congressmembers, congressional staff and the lobby community, who by many accounts pay attention to who’s buying space in Roll Call, The Hill, Congress Daily, etc. — both for the direct messages and for the indirect message sent about who’s willing to spend money to raise the profile of their issues.

The tactic of blowing up quotes from random website readers and implying that they’re in some way authoritative or represent the “official” opinion of that site? Bad form at best, and in my eyes it really undercuts the ad’s credibility as soon as you realize what they’re up to.

Of course, the group prefaces the quotes with the ambiguous headline, “Listen to what Americans are saying about the $15,000 Home Buyer Tax Credit,” which does suggest citizen involvement of some sort, reinforced by the fact that the quotes themselves aren’t exactly written in “newsy” language. But the tiny size of the disclaimer text immediately gives the game away — it reveals the ad as showing as much intellectual honesty as Rush Limbaugh picking inflammatory quotes from Daily Kos commenters and acting as though their authors speak for all “liberals.” Effective maybe, but only if you’re not really paying attention. Ethical? Give me a break.