Writing that personal ad for Barack Obama’s VP search on Sunday sure got me thinking seriously about the logic of putting Jim Webb on the Democratic ticket, and I’m clearly not the only one who’s had the Virginia Senator in mind lately. It’s hard to come up with someone who balances Barack Obama better, who fills so many of his gaps as a candidate and as a public persona:

Things that may work for him or against him but are cool and/or interesting:

Looks like a strong candidate to me, but we’ll see what Obama’s selection committee (and Obama himself) think. Here’s the social media angle: in the meantime, ObamaWebb 2008 has already taken off online, in the form of ObamaWebb08.com (apparent tagline: “We thought of it in November 2006!”), as well as this graphic which was emailed in a couple of days ago: 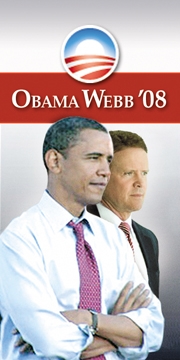