Internet/politics legend Mike Cornfield, who’s also here in LA for the Knight New Media Center seminar on Covering Politics in Cyberspace, just shot me a link to a groovy new application from OpenSecrets.org — it’s a browsable, graphical representation of who’s giving money to which presidential candidates. In a classic network-analysis format, it represents candidates and donors with circles and connections as lines. It’s also a Flash application with lots of nifty interaction: for instance, click on a candidate, then click on a big donor or on a category of donor, and up jumps the web of THE DONOR’S political links, along with the amounts they’ve contributed to each candidate (hmmmmm, Goldman Sachs LOVES Obama and Romney — a winning cross-party ticket if I ever heard of one — but doesn’t have quite as much juice for Hillary, Edwards and Dodd). Here’s a snapshot of a sample page; go dig around and see what you can find. 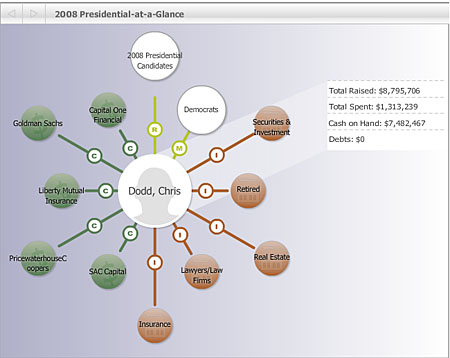