Are You Making These Five Political Text-Messaging Mistakes?

This article first appeared on the Smart As A Fox blog.

Over the last five years, I’ve noticed certain text-messaging mistakes organizations consistently make. It doesn’t matter if they’ve been running their mobile programs for several years or if they’ve just launched one. Many of these groups aren’t instructed-on or are simply not following basic best practices, while other mistakes derive from simply not testing before sending. Here are the top five text messaging mistakes I catch fairly often. 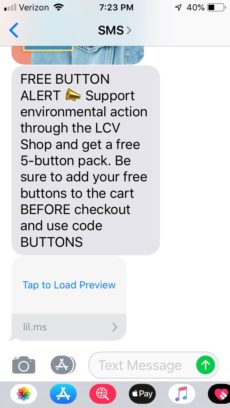 This headline is a bit misleading, but the most common mistake I see committed time and time again by organizations is sending out an SMS with a link but not testing first to see how it looks on both Android and iPhones. There is a particular function with iPhones where if a message with a link is sent without any characters following the URL it appears as a bubble that says â€œTap to Load Previewâ€ like the image on the right. The problem with this is that it creates a barrier to conversion.

Now two clicks are required for me to get to the landing page or form. Many people may not even bother clicking the first time to see â€œpreview.â€ Now if they had just put a period after the link or even a sign-off (i.e. – Jeff at LVC) that link would have appeared.

I’ve seen this text messaging mistake made by fairly well-established organizations like League of Conservation Voters, Sierra Club, Planned Parenthood, United We Dream, ACLU, etc. Now you know how to avoid it.

Not Identifying Your Organization 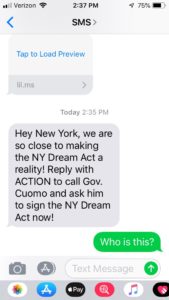 I don’t know about you, but I typically ignore messages when I don’t know who it is from. So by not identifying your organization or campaign you are not only breaking the law which can result in an audit and fine, but you are also bringing down your engagement via fewer responses and conversion rates.

SMS is not email! The best practice is to send between 2 and 4 text messages to your list per month. SMS is a very personal medium. This is where your supporters communicate with their family and friends. There are unfortunately a lot of bad actors out there who are running their mobile programs the same way they run their email program. These folks are ruining texting for the rest of us. There is a reason over 90% of Americans read the messages they receive via text within 90 seconds of receiving it.

This will change if campaigns (yes, I’m straight up calling out campaigns on this) keep misusing their texting programs and inundate supporters or voters with too many messages. In fact, in March 2019 I received a total of 8 text messages from one of the 2020 Presidential campaigns and over half of those messages were fundraising asks. I think they got my message because those numbers tapered off substantially in April and May.

Due to the increase in peer-to-peer messages to non-opted in voters in 2016 and 2018, phone carriers are cracking down on what they consider spam texts coming from long codes (ie. regular 10 digit phone numbers) and shared short codes (ie. 5-6 digit numbers). They can and will blacklist numbers or block more and more messages.

Never just send a message to send a message. Always have a goal, and a clear reason for texting that will benefit and engage the recipient. Also, ONLY one-fourth of your SMS messages should be fundraising asks. Texting is about engaging your list. Tell them about an event in their area, ask them to call their Senator about a bill or come into your headquarters to canvass or make phone calls. 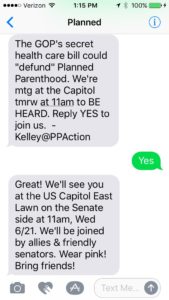 One of the best things about text messaging is that unlike many other channels where you are talking at someone, with SMS you can actually have a conversation. You aren’t just blasting a message out into the ether. You are engaging with your supporters by asking them questions or requesting information.

Don’t just send a message about an event with a link. Ask if they can come by replying YES. Then respond to those who replied YES with the event details. Now you have a targeted list of individuals you can send a reminder text to the day before the event. With broadcast SMS all this can be automated. With P2P you can create the planned responses for your staff, interns or volunteers to send.

Always be prepared to respond to folks one-on-one. One of my favorite conversations was a lovely elderly woman who wanted to attend Planned Parenthood’s Rally in her nearest city, but was in the hospital because she broke her hip. She had responded to a broadcast text we had sent and I was monitoring replies to respond. She told me about the abortion she had pre-Roe and how she wanted a better world for her grandchildren.

That interaction, those conversations, are important for building a community – a movement.

It’s almost 2020, if you don’t have mobile-ready landing pages by now that is a problem. You don’t want to send someone via SMS to a landing page they can’t read or maneuver through easily on your phone. On top of that, the majority of people are now reading their emails on their phones too. It’s just a bad practice.

Not sure if your pages are responsive design? Test them.