How to Become a Political Robocall

The mission: to build a Halloween costume that’s both politically topical and DOESN’T involve Sarah Palin. The constraints: limited time, weak hand/eye coordination, no patience. Bonus for: shininess. The result: political robocalls, embodied in physical form. Instructions and after-action report below the break. 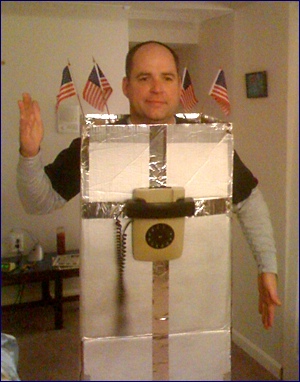 Please note that this costume is not for amateurs — you’ll be in a box for hours, which takes both skill and commitment. Also, you’ll want to use the solid construction techniques described below, since people will try to answer your phone all night long (believe you me).