The Obama/Kennedy BFF Photos and the Fallout from Clinton Negativity

It’s a clichÃ© for a good reason: in politics, what a difference a few days can make. After New Hampshire and Nevada, Hillary Clinton seemed to have stolen Barack Obama’s momentum, and the Clintons were hitting him hard in the South. Now, South Carolina voters have come out for Obama in a big way, and the flood of big Democratic names joining along has culminated in the photo of Obama and Ted Kennedy below: 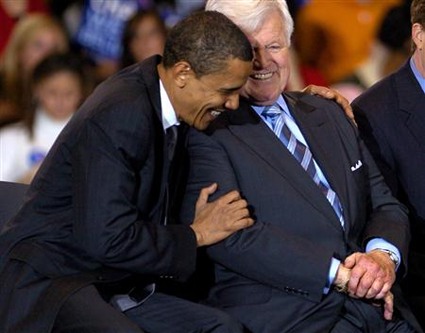 What an amazing image! It’s hard to think of a more dramatic changing-of-the-guard moment, and the TV types were of course comparing it to the legendary photo of a young Bill Clinton meeting JFK. Now that Obama and JFK’s only surviving brother are all BFF and stuff (that’s Best Friends Forever, mom), what strikes me is how fast Democrats recoiled against the way the Clintons attacked Obama last week.

The reaction was more than a calculated desire not to weaken a possible nominee; it felt far more visceral than that. I think Democrats simply didn’t really want to be BE this kind of party and this kind of people. The Clintons play rough, which may have suited the post-Lee Atwater, 90s era of negative campaigning, but it’s something that most Democrats and plenty of other people are simply sick of, particularly since many of us feel that we’ve been the victims of the Republican version of it since 2001.

Many have criticized Obama for what they see as vague promises of hope, but that’s also what fuels his appeal to people tired of listening to Boomers squabble. Plenty of us are sick of fighting the same old battles over and over again, and by reminding us how unpleasant those old conflicts can be, Bill and Hillary Clinton made one of the most powerful arguments against electing her president. Hillary Clinton may not keep her edge in “superdelegate” endorsements much longer. Update: Kennedy’s already featured in a message to the John Kerry list.