A new site announcement arrived in my inbox today, courtesy of an aggressive Waggener Edstrom outreach campaign (two separate emails came — here and here — plus an extra copy of the second; the PDFs unfortunately don’t fully capture the complexity of the messages’ layout). LeftvsRight.com is a strange mix of targeted political search engine and political entertainment, and as someone who helped start a targeted political search engine in 1999, I feel a unique obligation to take a good look at it. Particularly since a LeftvsRight.com visitor’s first impression is likely going to be to wonder what the hell is going on.

What’s going on is a weird Flash-based combination of television and the ‘net, with Microsoft LiveSearch results packaged inside a video framework (Microsoft appears to own the site). Your first hint of the format comes at the load screen shown below, which you’ll see for a while because the site was slow to fill in even over a fast connection.

While you’re waiting, the two hosts pose in still photos and aim speech-bubble bursts at you and each other. The actual search page is structured like a Crossfire set: 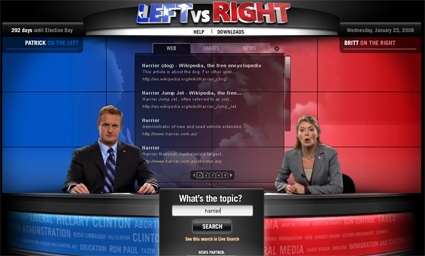 Which you’ll have to get through a (skippable) TV talkshow-style video intro to see. Search results display between the human hosts as though on a drop-down screen, with the characters reacting to your queries with pre-recorded video clips. Yep, the site’s producers have pre-scripted lots of little video skits tied to various political search topics, with another set designed to fire up if you search for something without a custom comment prepared (i.e., Female host: “Being a pundit means never having to care about what normal people care about.” Male host: “Like your query.”). The hosts will also start doing things if you don’t interact with the site for a while, which can be a little disconcerting, when for instance your computer suddenly starts singing “This Land is Your Land” poorly and loudly at you while you’re on the other side of the room making lunch.

The core of the site is its hosts, lefty Patrick O’Neil and righty Britt Hayes (as fits current television convention, the lefty is played as a little schlubby and slightly seedy and the rightie is an ice-cold hot blonde). The shtick isn’t bad at all, and they clearly took a lot of time preparing their parts. The odd reactive format makes trying different queries fun in a choose-your-own-adventure kind of way, and the search results seem to be useful enough. The right/left filters let you choose information from ideologically correct sites, and the differing results are interesting to see, but ultimately you’re limited to the sites preselected by the site’s producers.

As a piece of web entertainment, I give it an A for effort and a B++ for execution — the left/right layout is a little dated, as are a good number of the jokes (more Crossfire than Comedy Central), but the concept of tying video to search is interesting, the characters are engaging and the writing’s not bad at all. As a search engine, it’s pointless — Google was already returning better search results than a pre-selected list of political sites in the year 2000, as some of us found out painfully, and the long loading time required by the extensive video makes this site frustrating to use for anything practical. Fun to play with, and Mac vs. PC kind of clever, but definitely more of a dessert dish than a solid political meal.