A couple of good presidential campaign site reviews have popped up today: first, Todd Zeigler at the Bivings Report looks at Obama’s somewhat ghostly new site and finds that the redesign is a big improvement. In a very nice touch that shows the advantage of looking at these things over time, he displays screen shots of the candidate’s site at different stages of its evolution over the past year. I’ll agree with him in particular about the file-size question — feature-heavy sites look cool and meet a lot of needs, but not everybody’s on broadband all the time, and keeping a dial-up connection in the office for testing wouldn’t hurt. Even if you’re only cutting out 20% of possible supporters by making them wait too long for a page too load (or on database-heavy sites, for a page to be useful at all), they might just be a 20% you need.

Next, living up to the promise of her last name, Zephyr Teachout grades the Republican candidates’ sites from the point of view of undecided voters. Huckabee and Paul get top marks, with sites that work hard to persuade the the uncommitted, while McCain lags a bit behind but still gets a passing grade. Romney and Guiliani clearly need remedial classes, with cluttered, over-busy sites that seem determined to get your support but don’t quite tell you why. My questions? First, why doesn’t Rudy Giuliani own his own name? Second, why is Mitt Romney running from his supporters? The collage from the bottom right of his site’s splash screen looks more like a promo for a zombie film than a campaign image. Slow zombies or fast? You be the judge. 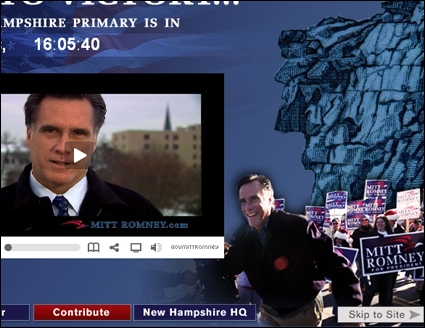