Using the Web to Pressure the Sunday Morning Talkshow Gang

Here’s a fun approach to shifting the political baseline: track the Sunday morning talkshows, Media Matters-style, and rally the rabble to smack ’em when they ignore your issues. As vapid and self-impressed as these shows often are (they usually resemble Kabuki theater more than any form of meaningful political discourse), they still have a disproportionate influence on the direction of our political discussion, and by ignoring an issue they can help to bury it.

In this case, the League of Conservation Voters has discovered that Russert, Blitzer, Stephanopoulos, et al have asked some 2275 questions of presidential candidates on the air in 2007, but only THREE concerned global warming. To try to change this state of affairs, LCV has launched What Are They Waiting For?, a site and online petition that attempts to get the attention of the shows’ producers, reporters and stars. Nice Flash work (note the sweating snowman), good use of video and also good use of blog ads to get the message out. I’m a little troubled by the lack of an opt-out from LCV’s list on the petition, though — that’s bad email list-management practice and frankly a little rude. Still, the site’s worth checking out: 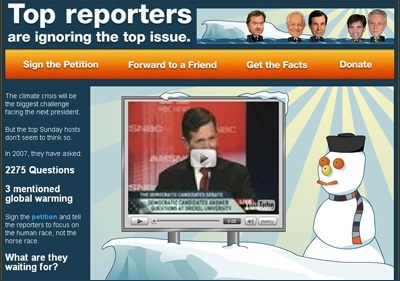