Author Deepak Puri is the co-founder and CEO of Democracy Labs. This article first appeared on the DemLabs blog.

Online petitions help build public support for a cause. But…

How does a small grassroots group, with just a few volunteers collect more signatures for their petition drive? Relational organizing.

For Our Kids Montréal is a Canadian grassroots organization that advocates for climate justice. Recently, its volunteers prepared a petition objecting to a mandate requiring students to wear disposable masks rather than reusable cloth masks in high schools across Quebec. In an example of relational outreach, members used the Vote Force to share the Change.org petition through social media and SMS messaging using VoteForce, a free relational organizing app. 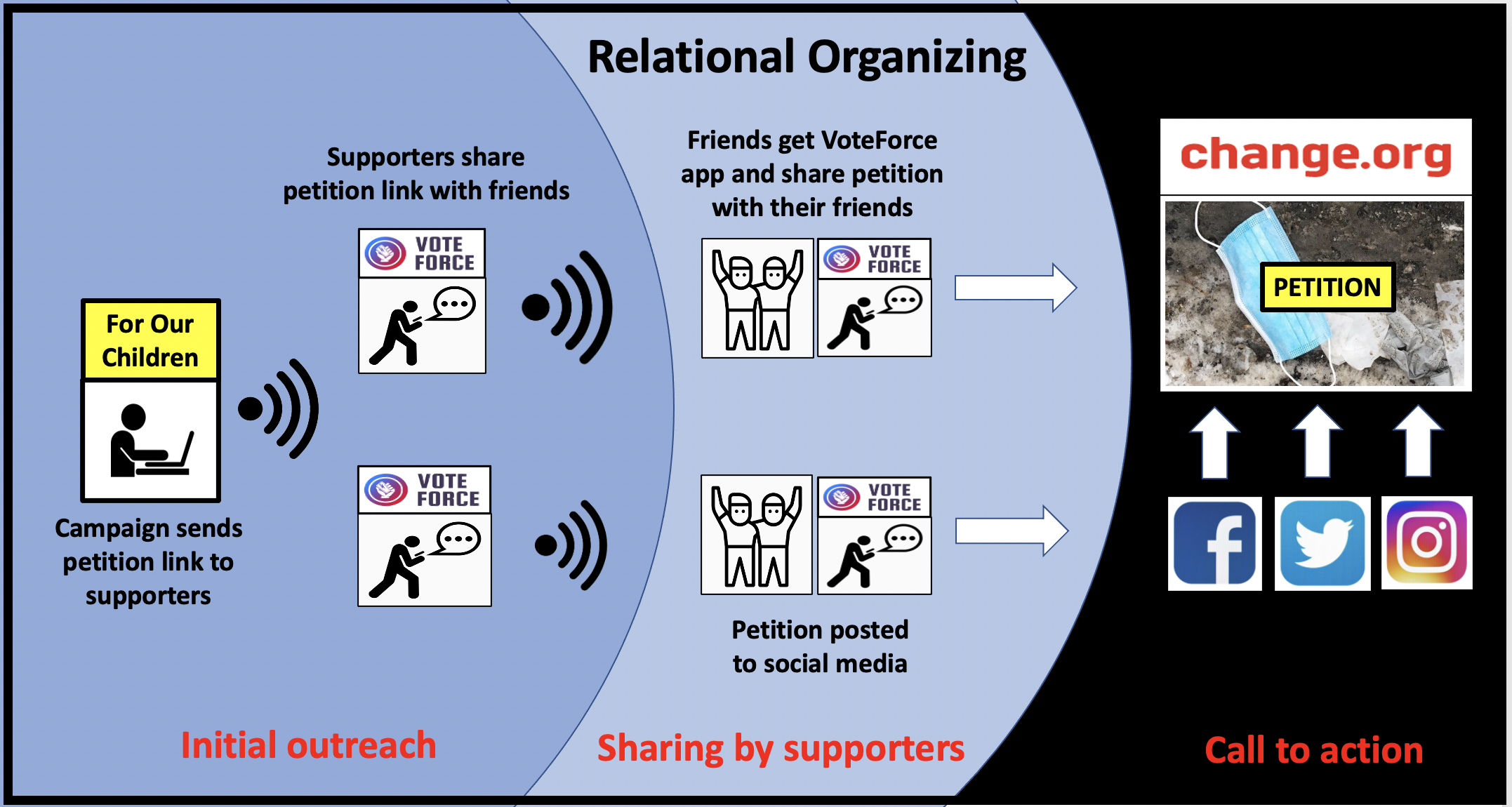 How For Our Children uses relational organizing to collect more signatures on a petition demanding authorities approve reusable masks for school children.

“Relational organizing is simply facilitating conversations between friends, family, neighbors, and co-workers. Instead of relying on traditional strategies like door knocking, phone calls, or texts from strangers, it harnesses existing relationships to mobilize voters. Word-of-mouth and community-based activism were the backbone of the civil rights, women’s rights, farmworkers’, and labor movements.” – Mother Jones

“Obama for America recruited, motivated, developed, and managed its formidable army of 2.2 million volunteers. Unlike previous field campaigns that drew their power from staff, consultants, and paid canvassers, the Obama campaign’s capacity came from unpaid local citizens who took responsibility for organizing their own neighborhoods. The campaign engaged citizens in the work of practicing democracy.” – GroundBreakers by Hahrie Han.

How does a small grassroots group with a few volunteers and no budget use relational organizing? How can this be done safely in a pandemic? How can it be made fast and simple for volunteers and letting them keep their friends’ details confidential? These are the lessons from the For Our Kids Montréal campaign.

The local chapter of a Canada-wide organization, For Our Kids Montréal is a group of parents, grandparents, caregivers and kids organizing educational events and collective actions around climate justice. They are organizing against the the government of Quebec’s decision to “require high school students to wear a disposable surgical mask” instead of a 3-ply reusable cloth mask. Their online campaign includes:

Using relationships to organize for change

Once the campaign framework was in place, For Our Kids Montréal organizers created the messages that they wanted volunteers to share. They then contacted their members to let them know they could download and use the VoteForce app to circulate the messages through SMS messaging or social media to encourage people to sign the petition asking the government to allow high school students to wear 3-ply cloth masks.

For Our Kids Montréal used these steps in their petition drive:

For Our Kids Montréal member and co-coordinator of the mask petition Alayne Moody used Vote Force to share the petition through SMS messaging on her phone. “I know a lot of people who don’t often check their social media feeds or who don’t use social media at all,” she said. “Vote Force allowed me to easily select people from my contact list that I thought would be interested in the petition and quickly send them a text message about it. The app was easy to install and use and I felt comfortable knowing that neither my privacy nor that of my friends would be compromised.”

Volunteers with the VoteForce app are alerted when there is a new message for them to share based on their location and interests. They can see all the available messages for them in the app. They choose the message to share and then either text the message to their friends by choosing them from their phone book, or they can take the post it to their social media accounts with just one click. This enables them to apply their relations with friends and through social media to generate more support for the petition.

Takeaway: Amplify your message through your volunteers’ friends and social media presence. Use relational organizing apps like VoteForce (that’s free for social justice, voting rights and environmental groups) to reach more people, boost your petition drives and build support for your cause.