New guest author! Jesse Bacon works with our friend Laura Packard at PowerThru Consulting, and in the article below (first published on PowerThru’s blog), he wades into the Great Debate…about email acquisition channels.

If you’re a non-profit or political campaign and have an email list, chances are you want to grow it. (Read our tips on how to grow your email list through advocacy for non-profits and campaigns for more on that.) Even if you just wanted to stay the same size, you will need list growth simply to stay in place as people naturally “age out” of your list. One question on our minds is how do people on your list perform, based on how they were acquired.

You have a few basic options of how to grow your list (besides getting lucky and having your campaign or issue get a lot of media coverage so it spreads virally). The three main ways we see are a) paid acquisitions (paying someone, usually a service like Care2/Change.org/LeftAction/Democrats.com, to acquire new names), b) online advertising (in the case of Environmental Action, mostly Facebook — Google and other methods haven’t performed as well,) or c) joint actions with other like-minded groups where no money changes hands, and you exchange names instead.

Obviously, these methods are not exclusive, but I wanted to test how people acquired performed later. Would paying for people drive down their performance? Would list swaps give you people who don’t truly become members of your organization?

Our client Environmental Action has used all three of these methods, and we had already existing reporting groups for each one. I picked five of the client’s full list emails to ensure a large enough sample. The “Baseline” refers to the overall performance of the email. Here’s what I found: 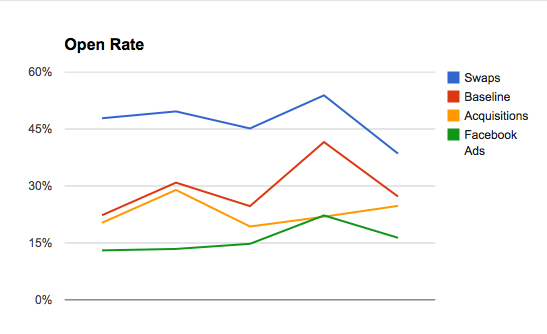 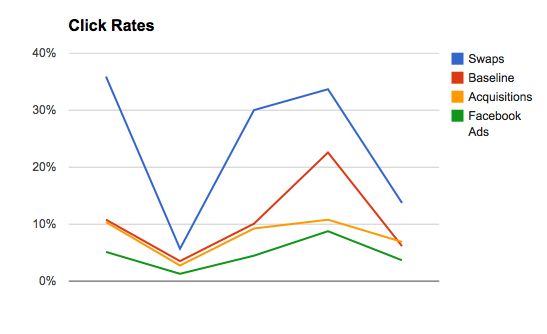 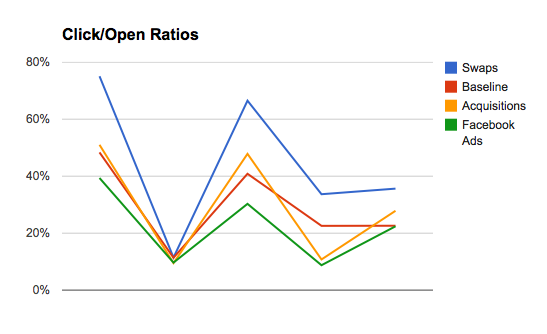 I was surprised how consistent the results were. In all of the emails, in almost of all the categories: the performance ranking from highest to lowest was 1) swaps, 2) paid acquisitions, 3) Facebook ads. The overall performance of the message was usually in the neighborhood of how paid acquisitions performed, sometimes closer to the list swaps group. So what can we learn?

1) Joint petitions/actions are great, you should do them. Sadly, this is the category of acquisition that is least under one’s own control, as it requires external partners. But assuming they are getting the same great results once they get your people on their list, it shouldn’t be impossible to find willing partners. Read my earlier blog post on how to avert list swap disaster for your non-profit or political campaign. Note that in this case study, we are talking about actions which clearly labeled that people were signing up to receive emails from Environmental Action, and the new signups were onboarded with a welcome email etc. A “list swap” in which email lists are traded and there is no signup process, no onboarding etc. is shady, sometimes illegal and will always lead to serious email deliverability issues. Political campaigns often fall into this trap — watch out!

3) Facebook ad people are low performing, but still above industry average. In our test, Facebook acquired names “only” performed 2-3 times better than the M+R industry averages (open rate 15-20%, click rate 10-20%/opens). The difference is that they performed 30-50% as well as the other segments. So if you need to build up an email list fast, Facebook ads can be very cheap – as low as $.40 a name. The trick is to design really good ads, and compelling actions that match up with them. We are working to test whether sending them exclusively messages on the issue related to the petition they signed works, or if segregating the initially inactive members of the ad segment helps keep up the performance.

Also worth investigating is how people acquired from Facebook via a petition tool like ActionSprout perform — in line with people acquired via Facebook ads pointing directly to an action or signup page?